News
Lights of Christmas Out Reach 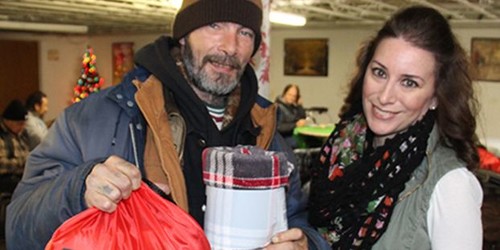 The summer of 2016 we decided to launch a new initiative that would benefit low income, hurting or homeless members of our community during Christmas. Our ministry was going to collect gift cards and then surprise neighbors in need for Christmas with some much needed love.  But how would we find these people that were living in their cars? Or perhaps had a home, but no water or electricity? Or that family that was just one bill away from a homeless shelter? How would we know the difference between someone wearing the wrong shoes for winter and NO SHOES; or the difference between a forgotten coat and NO COAT? Would we be able to tell the difference someone having a bad day and someone who was truly lonely, desperate and scared?

Then the news broke about the Dallas officers that were ambushed - 5 killed. This amidst news night after night - negative media towards law enforcement. And our nation became caught in a constant tug-a-war between people being afraid of police, and police being afraid of retaliation and the horrible scenes that we have seen played out since.

It was in those moments that we could feel God waiting patiently for us to connect the dots: we knew our officers knew how to find these citizens in our communities that were in need. They knew who was living in their cars. They knew who lived on the streets. They knew who was struggling. They came into contact with hurt every day – many opening up their own wallets to help someone in need. And the "Light" came on!  WE weren't the ones who needed to hand out these gift cards - instead, we decided to partner with area police to stock their squad cars with these gift cards for the officers to hand out to those in need that they came into contact with while on patrol.

And in doing so, we not only were able to help neighbors in need, but we began a way to counter the negativity and the hate portrayed and misconstrued in the media. We may not be able to change the world, but we know that our officers here in NE Wisconsin are awesome men and women of honor AND WE WILL PROACTIVELY DO WHAT WE CAN TO MAINTAIN POSITIVE RELATIONSHIPS BETWEEN OUR OFFICERS AND THE COMMUNITIES THEY SERVE - setting an example for the rest of the world; setting the bar.

It is not just up to the officers to launch these opportunities of positive relationship building. It takes a Community to come together as a family. They are heroes every day, and we will be the heroes behind them making sure that their LIGHTS SHINE BRIGHT!

Most importantly, because of your donation and support of this year’s Police Campaign:

Over 2500 lives impacted (not counting family members of those receiving a gift card/backpack!) with hundreds of Police Officers participating throughout Wisconsin…

SARANAC GLOVE donated lots of product to this campaign!